No Fresh Cut Flowers, an Afterlife Anthology, edited by Rachel Andrews, contains poems from 25 poets and is deliciously rich with thought provoking views of the afterlife, color photographs and comes with a full length soundtrack.

Soundtrack by: The Icarus Descent, ztraceny, Two Structures, Stung by Horses, The Autumn

“As I read from No Fresh Cut Flowers with the accompanying music specially composed for the book, a perfect ambiance manifests itself in the reading.

The poems are superior, plus the included color photographs.

It is evident that much thought has gone into the selection of poetry with an Afterlife theme. The various views and topics are from poets around the globe.

To have your own CD of music specially composed for the book along with a quality paperback makes this a good buy. It’s an excellent choice for spiritually-minded readers. It certainly makes a nice gift to others, awakening our spiritual senses.” — Mary J. Erickson

Penn Kemp: Poet, performer and playwright Penn Kemp has published twenty-five books of poetry and drama, had six plays and ten CDs produced as well as a DVD and several award-winning video poems. She performs in festivals around the world. Penn is currently Writer-in-Residence at University of Western Ontario. She hosts an eclectic literary show, Gathering Voices, on CHRWradio.com/talk/ gathering voices. She is a Leo with a mane of hair that will outlast her!

Byron Danziger is 38 years old and lives in Naugatuck, CT. His first letter written was the letter B and it has been an uphill battle ever since. This is his first time published. He was named after the poet, Lord Byron. We will await with much anticipation the future works of Byron Danziger.

P.A. Levy: Born in East London but now residing amongst the hedge mumblers of rural Suffolk, P.A.Levy has been published in many magazines, both on line and in print, from ‘A Cappella Zoo’ to ‘Zygote In My Coffee’ and many places in-between. He is also a founding member of the Clueless Collective and can be found loitering on page corners and wearing hoodies at www.cluelesscollective.co.uk

Richard Schiffman splits his time between New York City and an adobe cabin in the mountains of northern New Mexico. He has written two spiritual biographies: “Mother of All-A Revelation of the Motherhood of Godin the Life and Teachings of the Jillellamudi Mother,” and “Sri Ramakrishna, A Prophet For the New Age.” His poems have appeared in a wide variety of publications. His favorite spiritual practice is laughter and shaking (which he learned in an ashram    in Bali.) He believes that lives and afterlives are a passing phenomena, but that the soul is deathless.

Neil Ellman lives and writes in the Garden State, New Jersey. His poetry appears in numerous print and online journals from “A” (Astropoetica) to “Z” (Zygote in My Coffee) and many others in between. In the afterlife, he hopes to come back as Blue-gray Gnatcatcher.

Barbara Bialick is a resident of Newton, Massachusetts who grew up in Detroit, Michigan. She has degrees from the University of Michigan and Boston University. She has published widely in newspapers, magazines, anthologies and on-line in Ibbetson Street, Pemmican, Lilith Magazine, Istanbul Literary Review, Wilderness House Literary Review, and The Boston Area Small Press and Poetry Scene, to name a few. Her chapbook TIME LEAVES (Ibbetson Street Press) can be purchased at www.lulu.com.

J.J. Steinfeld: Canadian fiction writer, poet, and play-wright J. J. Steinfeld, it is rumoured, is currently having delightful angst- ridden chats with Franz Kafka and Samuel Beckett, among other deceased literary luminaries. Before his otherworldly departure, Steinfeld published two novels, nine short story collections, and two poetry collections —including two books in 2009, Word Burials (Novel and Stories, Crossing Chaos Enigmatic Ink) and Misshapenness (Poetry, Ekstasis Editions) -along with having over forty of his one-act and full-length plays performed in Canada and the United States. According to information gathered at several recent seances, Steinfeld keeps writing away, even in his ethereal form.

Peter Rennick: Not only do I believe in the afterlife, I believe in the beforelife as well. In this lifetime I am trying to write a valentine to all things, a monumental task, for which I will have to return again and again.

Tom  Clark was born in 1941 and is currently residing in  an afterlife, though not perhaps the one he might have preffered. Then again, one can’t have everything. His work appears most recently in the following books: The New World and Trans/Versions (Libellum); Something  in  the Air (Shearsman); Feeling for the Ground (BlazeVOX); and Starlight and Shadow (e-book: Ahadada).

Nick  Doniger  was  raised  in  Connecticut  and  received  a degree in American Studies from the University of Connecticut. He is a freelance writer, a musician, and the author of the culinary blog Sizzle Grove.

Scott Keeney is the author of Sappho Does Hay(na)ku. His works have lived in BlazeVOX, Columbia Poetry  Review, New York Quarterly, Poetry East, and other journals.

Ariel Chance DeVille is sort-of Canadian; an itinerant street performer, occasional poet, mad-scientist cook and all- around kook. She reads six books a week at minimum and can walk on her hands. She is uncertain of the existence of an afterlife, but finds it vastly more intriguing to choose to accept the possibility of such a wonder than to simply discard the concept out of hand.

Anna Taborska: Anna hails from London, England. Despite being a Leo born in the middle of summer, she has always been drawn to the dark side, and loves all things horror. After a failed attempt at brainwashing in a posh girls’ school and studying Experimental Psychology at Oxford University, Anna went on to gainful employment in public relations, journalism, advertising and the BBC, before throwing everything over to become a filmmaker and writer of horror stories, screenplays and poetry. Anna especially loves supernatural horror, and does not rule out the existence of ghosts.

N. A’Yara Stein is a Romani-American who currently lives on a chicory farm. She is a native of Memphis and a grant recipient of the Michigan Art Council and the Arkansas Arts Council. She’s published in places such as America, The New Orleans Review, The Oxford American, California Quarterly, and Great Midwestern Quarterly, et al. Ms. Stein, an Aquarian, lives in a near Chicago with her husband and son.

Phil Gruis is the author of two chapbooks published by Finishing Line Press. His poems have appeared in many journals in the US, UK and Canada, and he’s a Pushcart nominee. He lives with a brace of Newfoundlands on Kootenay Lake in British Columbia, in North Idaho and in a rolling Airstream. While thinking about the afterlife, it occurred to him that there’s another scenario or two he should run by his financial advisor.

Laury Egan: My first full-length collection, Snow, Shadows, a Stranger, was issued by FootHills Publishing in 2009 and individual poems have appeared in Atlanta Review, the Ledge, Foliate Oak, The Centrifugal Eye, Boston Literary Quarterly, Emily Dickinson Awards Anthology, Ginosko, and other journals. In addition to prose writing, I am a fine arts photographer and a believer in the afterlife, persuaded by my mother’s “visits.” Astrological sign? Cancer Sun, Sagittarius Moon, and Aries Ascendant, a combination that keeps me very busy.

Changming Yuan, born in the year of the rooster and growing up in rural China, is a twice Pushcart nominee and author of Chansons of a Chinaman (Leaf Garden) and Politics and Poetics (LAP). Currently he teaches writing in Vancouver and has had poems appearing in nearly 250 literary publications worldwide. Believing in an afterlife, Yuan has finally found the way to become a deity after death. shhh…

Lynn Hoffman: I’ve been a merchant seaman,  teacher, chef and cab driver. So far I’ve published two novels, The Bachelor’s Cat and bang BANG, a novel about a woman who takes revenge on the gun lobby. I’ve also written The New Short Course in Wine and The Short Course in Beer. A few years ago, I started writing poetry. I was born in Brooklyn and I live in Philadelphia. My astrological sign is For Rent.

Greta Bolger is a writer, photographer and shopkeeper  in glorious northern Michigan. Though she has no direct experience of the afterlife, she imagines it’s a pretty big place. Until the time comes to find out, she’ll continue to visit mediums, go to countries that celebrate the Day of the Dead, and publish her writing in print and online journals, which in the past have included Thema, The Chimaera, Eclectica, Raven Chronicles, Literary Bohemian, Juice Box, Third Coast and others.

Mary Belardi Erickson originated from Passaic, New Jersey, youthfully thrived in rural  West Concord,  Minnesota,  and now writes poetry at the end of a long lane north of Kerkhoven, Minnesota. She is nominated for Dancz Books Best of the Web 2010 and received 2nd Place, 2009 Numinous Magazine Poetry Prize. Mary is published in a variety of online and print magazines.

Antonia Clark lives in Vermont, where she works as a medical writer and editor. Her short stories and poems have appeared in numerous print and online journals, including The 2River View, The Missouri Review, The Pedestal Magazine, Rattle, and Stirring, and she is currently co- administrator of an online poetry forum, The Waters. She loves French food and wine and plays French café music on a sparkly purple accordion. Toni would love to find out that there’s an afterlife, but it doesn’t look good, so she’s making the most of this one.

Lisken Van Pelt Dus is a poet, teacher, and martial artist living in western Massachusetts. She is a Gemini, raised   in England, the US, and Mexico, so she is accustomed to crossing borders and living with multiple consciousnesses. Her work can be found in Conduit, Main Street Rag, The South Carolina Review, upstreet, and other journals and anthologies, and has earned awards from The Comstock Review and Atlanta Review. Her chapbook, Everywhere at Once, was published by Pudding House Press in 2009.

CJ Clayton Dippolito: Is pursuing a Masters of Fine Arts  in the Northeast Ohio Consortium at Youngstown State University with work published in Ruminate, Rubbertop Review, Gloom Cupboard and forthcoming in Penguin Review and Scifaikuest.

Karen Neuberg: This poem is an expansion of something    I saw when my mother was dying. A few hours before she actually died—she was in and out of consciousness—she lifted her arms and hands and they began moving, as though trying to reach/touch what her open eyes were seeing beyond what we could see. She seemed to be listening and then would nod her head and softly say yes, yes. It was easy to think she was being coached by all the many family and friends who died before her—they were guiding her and encouraging her on how to pass over. They were telling her not to be afraid. They were greeting her. If I believe in an afterlife, it is more like that of a soul, an energy, leaving the body at death and (re)joining a larger energy. 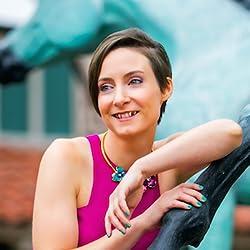 Rachel Archelaus is an internationally known spiritual teacher and business mentor to lightworkers. She founded the Intuitive Art Academy where she teaches people how to have a two way conversation with their intuition.